“City of Opportunity”(!) a couple of constructivist silhouettes optimistically proclaim at points around Belmont and its subsidiary suburbs. This mostly flat 8k ride is actually a pretty good advertisement for the best that Belmont has to offer while neatly managing to avoid the worst.

The best of it should be obvious from even a disdainfully fleeting glance at the map; it follows the mid reaches of the Swan River as it wanders aimlessly across the flat of the coastal plain. The path ducks in close to the river now, then briefly climbs up and back for a cinematic panorama.

Marvel at the way invasive bamboo has taken a chokehold here. Be enchanted by habitat restoration underway there. A patch of remnant native bush opens to reveal pretty jetty that is a wedding photographer’s dream.

This part of the river is close and sheltered making it a favourite haunt of rowing teams in training. I deduce from the presence of fisherfolk in dinghies and on shore there must be the odd fish of size still left poking about. At the upstream end round where Redcliffe Bridge crosses you may spot some rather larger critters bobbing about in the drink; Belmont is home to Ascot Racecourse. A good two thirds of this ride is in Ascot, the suburb, and Ascot, the suburb, has a higher population density of the genus equus than is usual in the Perth metro area.

The path is dotted with interesting oddments of local history. The most dramatic are the old brick kilns and their associated chimneys south of the racecourse. In a brickie sort of vein there’s also Bristile Park which once was home to display panels of roof tiles. A cute gnome size brick house remains. Unoccupied it seems.

The path for the length of the ride is mostly concrete or tarmac in good condition. A stretch of narrow boardwalk at the south end of Garvey Park provides comic relief. The few hundred metres of street riding to the east of Ascot Racecourse is well enough sorted with a good on road painted lane. Motor traffic here is light and accustomed to frequent horses and riders so it’s about as safe as street riding gets.

The only real drama is crossing Grandstand Road between Ascot Waters and the racecourse. Cyclists are let down badly by signage here. For those on a meandery sort of a day, blunder your way through Ascot Waters admiring the ghostly Stepford perfection of it all and cross to the north of the junction of Waterway Cr and Grandstand.

Once on the northeast side head northwest on the footpath toward Garrett Road Bridge. The cycle path heads east around the north side of the racecourse just south of the bridge. Travelers coming from Garvey Park should cross Grandstand as soon as possible and either go through Ascot Waters or down the footpath on Grandstand.

If you’re looking for a shorter ride simply turn back when you reach Grandstand Road from either direction; you’ve come about half way along anyway.

Weekday mornings and evenings, the southern half of it particularly, (from Ascot Racecourse to Goodwood Pde) is a commuter run. There are some sharpish and blindish corners so it pays to be somewhat less than witless on this stretch at these times. It’s a great out and back ride manageable by just about anybody owing to its mostly flat nature. There are a couple of short steep parts half way between Hardey Park and Cracknell Park.

If cycling picnics are your bag you're in for a treat! There are free barbecue facilities at Adachi Park, Gould Reserve (at the end of Epsom Ave) and Garvey Park. Garvey Park is huge and shady (lots of dog walkers though). It’s the home of the Ascot Kayak Club and also a jolly good kiosk which is open 5 days from 8 am. There are toilets at the boat-ramp, Adachi Park, The Esplanade and Garvey Park, though the day I rode the only one that had any loo paper was at Garvey Park - you have been warned!

By bike (yes!), you can come at the downstream end from the city via Windan Bridge (Graham Farmer Freeway) or from points south o’ river from Burswood or through Lathlain (cross the freeway at Riversdale Rd)

Closest train stations are Belmont Park (not all trains stop there though), Claisebrook on the  city side or Burswood.

By car, take the Victoria Park Drive exit from either direction on the Graham Farmer Freeway, stay on or head to the east side of the freeway and park at the Goodwood Pde boat-ramp. Which, by quirk of history and urban renewal, is actually on Balbuk Way not Goodwood Pde.

There’s a bike path from Guildford that comes down Fauntleroy Ave.

Car access is Fautleroy Ave with plenty of parking at Garvey Park.

Trains run rather inconveniently on the other side of the river. 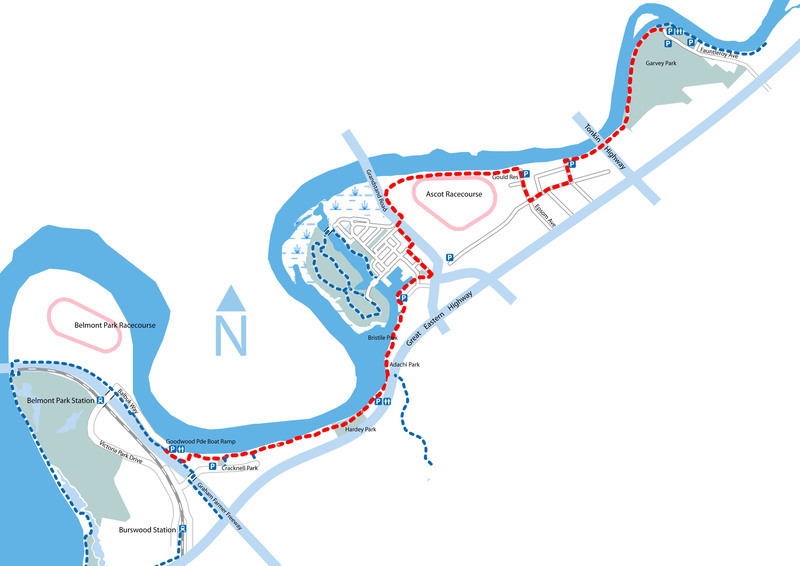